Start a Wiki
"This is the website... judging by all of the text. Wish I could read it.... What even is this?"
This article is incorrect, outdated, or otherwise needs improvement. Help update the page by editing it.
The specific problems are: needs cleanup/rewrite

Pieces are objects collected throughout Petscop by the player, a score is kept by the game of how many have been obtained. Pieces can usually be found spinning on the ground, ready to be picked up if walked on by the player, but they can also be physically present and attached to something else, needing to be pried free to be collected. It is unknown what the original purpose of these pieces were, however 1000 of them are needed to activate the Machine in the School basement.

In the windmill, they can be found in a heap around the windmill's internal workings and cause it to spin the wrong direction, Paul has to use the white TOOL to collect them and return the windmill to normal working order, giving him 50 pieces. In the house, the Table Objects seem to be ensnared by them, and Paul must capture a teal TOOL in a bucket and use it to harvest them, giving him 15 pieces. In the Computer room, a large semi-transparent cone piece with smaller blue cone pieces circling around it appears in the room. The large cone piece seems to be "glitching" out, with it also making sounds similar to the ones that play when picking up pieces. It is the only object that can be interacted with green TOOL, and doing so grants the player 26 pieces. This appears to shut off every computer in the room, along with the giant cone piece, as the smaller blue cones disappear and no noise is being emitted.

Pieces come in the following forms:

The piece counter can be used to keep track of when Paul starts a new save, as he does in Petscop 13.

Paul and Belle both obtained 500 pieces to activate the machine, and seeing how Belle had to collect some pieces that Paul got before, this could mean that there are only 500 pieces in the entire game. However, assuming there isn't another location we were never shown, it is unknown how Paul/Belle were able to retrieve every piece on the second floor of the school, as GiRL drags the player to it when they get too far away.

Different colored TOOL seem to have an importance when it comes to removing and collecting pieces.

Lina Leskowitz's ingame appearance in the windmill and brighten Newmaker Plane has a similar shape to a cone piece, most notably the large cone piece seen in the computer room, hinting that there may be a connection in some way. This is supported by how the Party room Loading screen depicts a blue cone piece in front of a dark background, possibly also being the same one from the computer room.

Specific types and shapes of pieces appear to have some power that can aside from being collectables. What exact purpose they serve is unknown, but many of them are arranged in certain positions when attached to something else. It may be possible they can cause unusual events in the game to happen or be prevented when attached to objects, given their usage in the basement machine and the Windmill.

The large cone piece in the computer room could be a machine powering the Tarnacop computers.

It is possible that playing one of the Board games disables the dragging on the 2nd floor of the school. Allowing the player to collect every piece on that floor.

Belle's starting position has been inferred to be the Quitter's Room, as she has no collectibles when she is there.

Pieces shown in the windmill 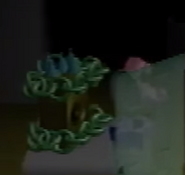 Pieces wrapped around the table objects in the house.

Wrapped pieces on the table shown from Care's room.

Large cone piece with the smaller blue cone pieces moving around it from the Computer room
Add a photo to this gallery
Retrieved from "https://petscop.fandom.com/wiki/Pieces?oldid=7502"
Community content is available under CC-BY-SA unless otherwise noted.