The player character, officially called the Guardian[1], is the general default avatar used in Petscop by the current player.

The character has yellow-green skin, white circular eyes, large cheeks, large feet, and no arms. The character wears a dark green shirt, brown pants, and no footwear. The character's mouth is triangular and always open.

Objects such as keys that the player is carrying at the time are displayed hovering over the head of the player character. In the house's living room during Strange situation (shown in Petscop 14 and Petscop 17), it can be seen wearing a party hat and dragging a yellow balloon along with it.

The development of the guardian sprite, along with its official name, was shown in Petscop 18.

The 4th iteration is used when the player is dragged to the "GiRL" on the second floor of the school. Generations 1 and 2 use the 6th iteration for the player sprite. Only the final sprite appears to have full animations. 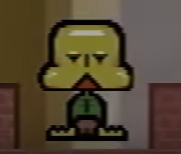 Iteration 4 in the school 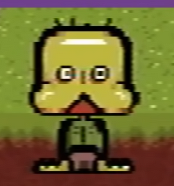 In Petscop, the current player is shown with the default sprite. However, other players or NPCs, are shown with varied heads. These heads are always facing the same direction, while the body retains the animations.

Belle is shown with a different (possibly unfinished) head sprite. Marvin has the body of the default character and a distorted green head. Paul, and possibly Care, seemingly appear with a pyramid-shaped head.

The shirt that the player character sprite wears is possibly reflecting a straitjacket.

The red triangle or pyramid mouth may have a relation to the Pyramid Head character.

The skin color is similar to Pen and Hudson, possibly indicating a relation.

Looking at the character from the side, it looks similar to a green-tinted skull.

The name of "Guardian" possibly refers to an assigned protector or caretaker of a child.

Red TOOL responds with "Newmaker" to the player asking "Who are you?", but this may refer to the current player or an intended player rather than the player character itself.